Home Biology The Human Eyes and Its Major Defects

The Human Eyes and Its Major Defects

Study Notes On Human Eye for RRB NTPC, SSC and Other Exams 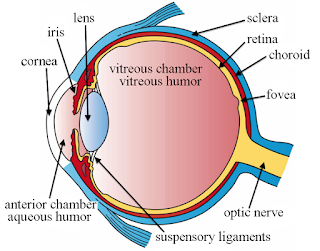 The Human Eyes situated in the sockets of the skull called orbits. The eye ball is mainly spherical in structure.

It is the transparent spherical membrane covering in the front of the eyes. Light enters in the eyes through this membrane. Most of the refraction of light rays entering the eye occurs at the outer surface of the cornea.

It is the central part of the eye that facilitates the image formation.

It is dark muscular diaphragm between the Cornea and the lens. It controls the size of the pupil. It is the colour of the iris that we call colour of the eyes.

It is a small hole between the iris through which light enters the eyes. In dim light, it opens up completely due to contraction of iris muscles, but in the bright light it becomes very small due to relaxation of irish muscles.

They hold the lense in position and help in modifying the curvature of the lens.

It is the light sensitive surface of eye on which the image is formed. It contains light sensitive cells rodes and cones. Rod cells respond to the intensity of light and cones respond to the illumination. There number is around 125 million. Number of rod cells is greater than number of cone cells. These cells generate signals which are transmitted to the brain through optical nerves.

It transmits visual information from the retina to the brain.

It is an opaque, fibrous, protective, outer layer of an eye containing Collagen and elastic fibre. It is also known as white of the eye.

It is the point at which the optic nerves leave the eyes. It contains no rods and cones, so an image formed at this point is not sent to the brain.

Behind the cornea, we have a space filled with white transparent liquid called the aqueous humour and behind this there is a crystalline lense, which helps to refract light to be focused on retina and maintain intraocular pressure.

The space between eye lense and retina is filled with another liquid called viterous humour.

Myopia :- Also called short sightedness, in this problem eye can see only nearer objects. Distant objects are not seen clearly. This defect can be removed by using concave lense of suitable focal length.

Hypermetropia :- Long sightedness, in this problem eye can see distant objects clearly but nearer objects are not clearly visible. This defect can be removed by using a covex lense.

Presbyopia :- In this defect both near and far objects are not clearly visible. It can be removed by using bi-focal lense.

Astigmatism :- In this defects eye cannot see horizontal and vertical lines clearly. This defect can be removed by using suitable cylindrical lenses.