International Awards and prizes notes for RRB and SSC Exams

In this post we will learn about the important International Awards and Prizes that can ask in upcoming RRB and SSC Exams. 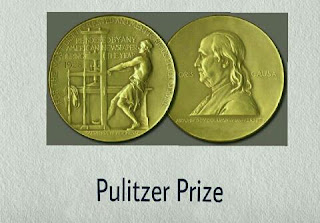 Field :- For achievements in newspaper, magazine and online journalism, literature, and musical composition in the United States.
Established in 1917 by provisions in the will of Joseph Pulitzer, US newspaper publisher, the awards are administered by Columbia University in New York City.


This Prizes are awarded yearly in twenty-one categories. In twenty of the categories, each winner receives a certificate and a US$15,000 cash award and the winner in the public service category of the journalism competition is awarded a gold medal.

The winners in the category of Letters, Drama and Music are listed below:

The Booker Prize for Fiction (formerly known as the Booker–McConnell Prize and the Man Booker Prize) is a literary prize awarded each year for the best original novel written in the English language and published in the United Kingdom.
It is the Highest Literary award to author of British, Irish and commonwealth countries.


In 2018, to celebrate the 50 anniversary, the Golden Man Booker was awarded. One book from each decade was selected by a panel of judges: Naipaul's In a Free State (the 1971 winner), Lively's Moon Tiger (1987), Ondaatje's The English Patient (1992), Mantel's Wolf Hall and Saunders' Lincoln in the Bardo. The winner, by popular vote, was The English Patient.The English Patient is a 1992 novel by Michael Ondaatje.

Important Winner of Booker Prize for RRB and SSC Exams

It was inaugurated in 2005. Until 2015, it was given every two years to a living author of any nationality for a body of work published in English or generally available in English translation. In 2016, the award was significantly reconfigured, and is now given annually to a single book in English translation, with a £50,000 prize for the winning title, shared equally between author and translator.

Oscars or The Academy Awards are a set of awards for artistic and technical merit in the film industry. Given annually by the Academy of Motion Picture Arts and Sciences (AMPAS)

Grammy Awards  are presented by the Recording Academy to recognize achievements in the music industry. The Grammys held for the first time on May 4, 1959, are the second of the Big Three major music awards held annually (between the American Music Awards in the Fall, and the Billboard Music Awards in the summer.
The 61st annual Grammy Awards were held on 10th February 2019, Grammy Awards 2019 is an award given to recognize and honor excellence in the field of recording arts or the music industry.

Record of the Year — THIS IS AMERICA.