Buddhism and its Philosophy 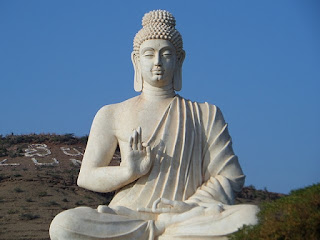 In this post we will learn about Rising of Buddhism in 6th century BC. How Gautam Buddha founded Buddhism that gave many people a peaceful way of life.

563 BC at Lumbani, Kapilvastu on Vaisakh Purnima day in Nepal. He belongs to Kashtriya Clan.

His father Suddhodhana was Saka ruler.
Mother name was Mahamaya who died after 7 day of his birth. He was brought by stepmother Gautami. He Married at the age 16 to Yashodhara. He had a son named Rahul.

At the age of 29 year after witnessing four scene in sequence an Old man, a sick-man, a dead body and a ascetic.

At 35 year of age at Bodh Gaya under Pipal Tree on the bank of river Niranjan (Phalgu) on the 49th day of meditation.

He gave his first sermon which is known as Dharmachakra Pravartna at Sarnath, where his five disciples had settled.

Hinayana or lesser vehicle :- its followers believed in the original teaching of the Buddha. They did not believe in the idal worship they believe in Karma. Pali, the languag of the masses, was used by Hinayana Buddhists. Ashoka patronised Hinayana Buddhism.

Mahayana or greater vehicle :- its followers believed in the heavenliness of the Buddha. It believed in idol worship. Sanskrit, the language of scholars, was used by Mahayana Buddhists. Kaniska and Harshvardhana supported Mahayana.

Vajrayana or vehicle of thunder bolt :- its followers believed that salvation be best attained by acquiring the magical power which they called Vajra. The chief divinities of this new sect were the Taras. It became popular in eastern India, particularly Bengal and Bihar.

Lorem ipsum is simply dummy text of the printing and typesetting industry.