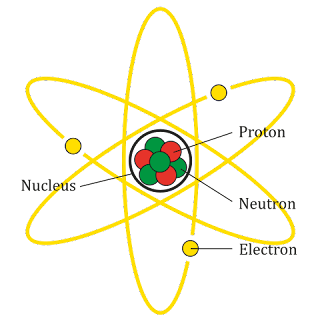 What is Atomic Structure ?

John Dalton, in the early nineteenth century gave his atomic theory. This theory has undergoes several changes owing to new discoveries. According to the modern atomic theory-atoms consists of electron, proton and neutron.

Electron is a subatomic particle that revolves around the nucleus in the atom. It’s mass is nearly negligible compared to that of the proton and neutron. It is 1/1837 of the mass of a hydrogen atom.

Like electron it is also a fundamental subatomic particle that present in the nucleus of the atom. It determine e the atomic number of the electron.

Along with the proton it constitutes the nucleus. It has no charge and Mass is slightly greater than a proton.

In his famous alpha particle scattering experiment, Rutherford tried to study the arrangement of the subatomic particle inside the atom.
This model suggest that :-

Atomic number can be defined as the number of proton present in the atom. It is also equal to the number if electrons present in a neutral atom.

Mass number of an element is the sum of the number of protons and number of neutrons that present in the nucleus. eg- Mass number of carbon is 14 and it can be written as C14.

How to find numbers of Electron, protons and neutrons in any given element ?

Isotopes are the Atoms of same elements having same atomic number but different in mass number. eg – protium(₁H¹), Deuterium(₁H²), Tritium (₁H³) these are the isotopes of hydrogen. Isotopes have similar chemical properties but different physical properties.

Hydrogen(₁H¹) is the only atom in which neutrons are not present.

Protium(₁H¹) is the lightest isotope whereas Lead(Pb²⁰⁸) is the heaviest isotopes.

Atoms of different elements having same number of neutrons but different mass number. eg – ₁₁Na²³, ₁₂Mg²⁴ both have 12 neutrons.

The three-dimensional space, present around the nucleus of an atom, where probability of finding an electron is maximum, is called orbital. Each orbital is associated with a fixed number of electron.

Shell and subshell of an atom

These shells are represented by K, L, M, N, etc symbols. Where energy of shell K < L < M < N.
Each orbit or shell consist of one or more subshell depending upon the three dimensional graphic plot of electronic wave function and the internal atomic composition.

Each subshell is associated with one or more orbitals that are represented by the small letters s, p, d, f respectively.

It is the combination of four numbers which shows position or energy, subshell, orientation and spin of an electron.

It describe the subshell or angular momentum of the electrons ( shape of the orbital in three dimension). Its value ranges from 0 to (n-1).

It determines the direction of an orbital in the space. Its value ranges from -1 to +1 including 0.

It determine the spin of the electron. There are two possible spins – clockwise and anticlockwise.

According to this rule, the electrons enter in the orbit in accordance with the following rules :- 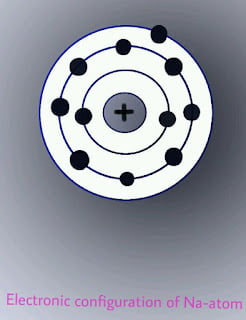 Eg:- sodium(₁₁Na) has atomic number 11 and we know atomic number = number of proton or electron present in an atom.
We can say that sodium(Na) has 11 electron in its atom.
When we arrange these electrons in shells we will find K, L and M shells with 2, 8 ,1 electrons respectively.
Also Red
Chemical compound with formula

2 thoughts on “ATOMIC STRUCTURE NOTES FOR RRB AND SSC EXAMS”