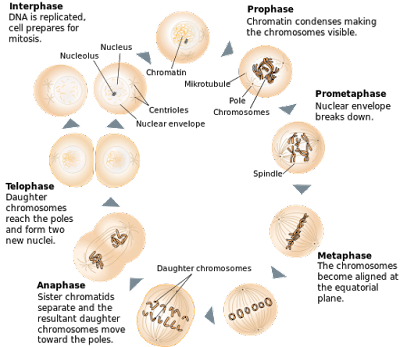 Mitosis cell Division:- It usually takes place in somatic cell of animal. In this type of cell division mother cell divides in two daughter cell of same number of chromosomes. It occurs in various phases such as prophase, metaphase, anaphase and telophase.

Chromosomes are already duplicated as paired chromatids.
Sister chromatids attached to each other at a small region called centromere.
Spindle fibers appear between daughter centrioles forming the achromatic spindle.
Nuclear membrane and nucleolus disappear.
Metaphase:- Each chromosomes gets attached to spindle by its centromere.
Chromosomes line up one plane at equator.
Anaphase:- Centromere attaching the two chromatids divides or splits.
The two sister chromatids of each chromosomes separates and  are drawn apart towards opposite poles pulled by shortening of spindle fibres.
A furrow starts in the cell membrane at the middle in animal cell.
Telophase:- Two sets of daughter chromosomes reach opposite poles.
Spindle fibres disappears.
Chromatids thin out in the form of chromatin fibres.
Nuclear membrane is formed
The cleavage furrow starts deepening in the animal cell
Nucleoli appear
Two daughter cell formed from one mother cell with equal number of chromosomes.

Meiosis cell Division :-
It occurs in reproductive cells and is called reproduction division. In this type of cell division one mother cell divides in four daughter cells with half the chromosomes of the mother cells.
It consist of two stage of division that occur successively in an organism with one time chromosomes replication
First meiotic division (Meiosis 1)
Second Meiotic Division (Meiosis 2) 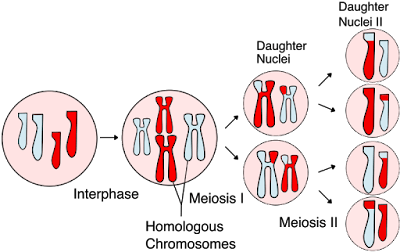 Meiosis cell division (image source :- wikipedia)
Meiosis 1 :- In this type of division, parental chromosomes replicate to produce identical sister chromatids and the number of chromosomes reduces from diploid(2n) to haploid(n).
Like mitosis, it also involves the four phases of division i.e Prophase 1, Metaphase 1, Anaphase 1, Telophase 1.
Meiosis 2 :- The mitotic division is exactly the same in overall process as mitotic division.There is no reduction in the number of chromosomes and the haploid nuclei diploid mitotically in order to produce four haploid daughter nuclei. The phase involves in meiosis ll are prophase 2, metaphase 2, Anaphase 2 and Telophase 2. After the meiosis ll four daughter cells are formed from the original single parent cell and each one is haploid (n) in nature.