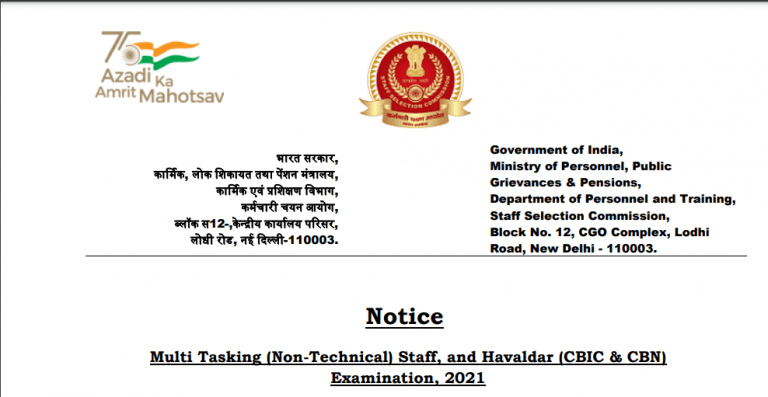 The examination will consist of a Computer Based Examination (Paper-I), Physical Efficiency Test (PET)/ Physical Standard Test (PST) (only for the post of Havaldar) and a Descriptive Paper (Paper-II)

Paper-I will consist of Objective Type, Multiple choice questions. The questions will be set both in English & Hindi for Part-II, III & IV.

There will be negative marking of 0.25 marks for each wrong answer. Candidates are, therefore, advised to keep this in mind while answering the questions.

Paper-II will be of descriptive type in ‘Pen and Paper’ Mode in which the candidates will be required to write a short essay and a letter in English or any language included in the Schedule-VIII of the Constitution.

Paper-II will only be of qualifying nature and is intended to test elementary language skills in view of categorization of the post as Group-C and in view of job requirements. However, marks scored by the candidates in Paper-II will be used to decide merit in case more than one candidate score equal normalized marks in Paper-I.

SSC MTS syllabus for the paper-1 is given below –

Candidates’ understanding of the basics of English Language, its vocabulary, grammar, sentence structure, synonyms, antonyms and its correct usage, etc. and writing ability would be tested.

It will include questions on problems relating to Number Systems, Computation of Whole Numbers, Decimals and Fractions and relationship between Numbers, Fundamental arithmetical operations, Percentages, Ratio and Proportion, Averages, Interest, Profit and Loss, Discount, use of Tables and Graphs, Mensuration, Time and Distance, Ratio and Time, Time and Work, etc.

Questions will be designed to test the ability of the candidate’s general awareness of the environment around him and its application to society. Questions will also be designed to test knowledge of current events and of such matters of everyday observation and experience in their scientific aspects as may be expected of an educated person. The test will also include questions relating to India and its neighboring countries especially pertaining to Sports, History, Culture, Geography, Economic scene, General Polity including Indian Constitution, and Scientific Research etc. These questions will be such that they do not require a special study of any discipline.

SSC MTS Syllabus for paper -2 is given below –

The Paper will be set in Hindi, English and in other languages mentioned in the Schedule-VIII of the Constitution to test basic language skills commensurate with the educational qualification prescribed for the post. Candidates will be required to write one short essay/ letter.

The minimum physical standards for the post of Havaldar in CBIC and CBN are as follows: