United Nations and Its member-countries

UNO :- United Nations Organisations is the world’s largest international organisation and a successor of league of nations. (league of Nations was formed after the first world war , but it failed).

Headquarters :- its headquarter located at New York, US. 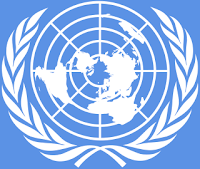 Flag :- White UN emblem (2 bent olive branches open at top, and in between them is the map of the world) on a light blue background. It was adopted on October 20, 1947.

Official Languages:- the official language of UN are English, French, Chinese, Russian, Arabic and Spanish while working language are English and French only.

there are six principal bodies on the United Nations (UN) :-

Permanent Members:- China, France, Russia, UK and USA are the permanent member of Security Council
The non permanent members are elected by the General Assembly for 2 year from among the member states
International Court of Justice consists of   15 judges