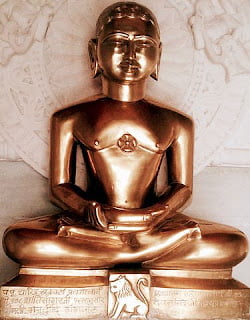 In this chapter we learn about Religious Rise in 6th Century BCE. How Vardhman Mahavir spread Jainism its impact on common people. This chapter is dedicated for upcoming Government exams like RRB NTPC, GROUP-D and SSC Exams.

Jainism mainly aimed at the freedom of the individual from worldly bonds.

First Council: The First Council was held at Patliputra by Sthulabahu at the beginning of the third century BCE and resulted in the compilation of the 12 Angas to replace the lost 14 Purvas.

Second Council: The Second Council was held at Vallabhi in the fifth century CE under the leadership of Devaradhi Kshmasramana and resulted in the final compilation of the 12 Angas and 12 Upangas.

Various factors contributed to the decline of Jainism in India :

1 thought on “Vardhman Mahavira and Jainism”